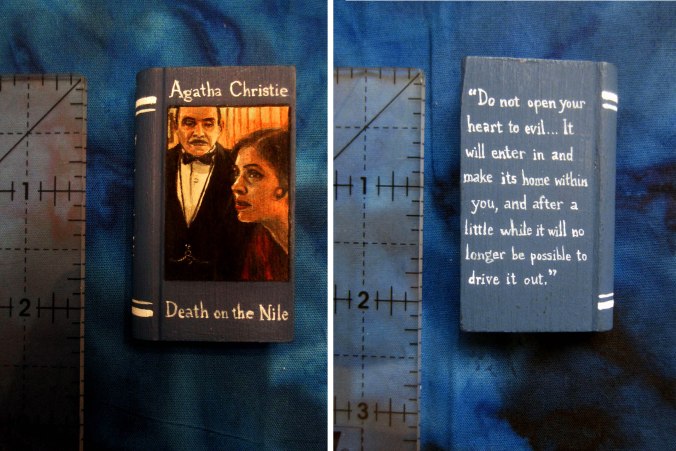 A great quote from one of Agatha’s best books, but not one of my best covers. I was tweaking this for days, utterly unsatisfied with the likeness of Jacqueline. Some people actually like this cover the best (!) but I think that’s just because it’s such an AMAZING episode. The best bit of the painting was Poirot’s little silver fob.

This was another one where the likeness took a long time, but I was more satisfied with the final result. I had a deuce of a time finding a still from the episode to use! Since Five Little Pigs is told in flashback, Poirot is not in the story’s main action; since I wanted him on the cover, I was obliged to use a scene from the denouement. And since another of my personal rules for painting these covers is “If it wasn’t something that could have happened in the book, it can’t go on the cover,” I couldn’t use the best and most dramatic shot, which was Lucy Crale with a gun, with Poirot behind her. So this is the shot I found; I like it because it’s different. 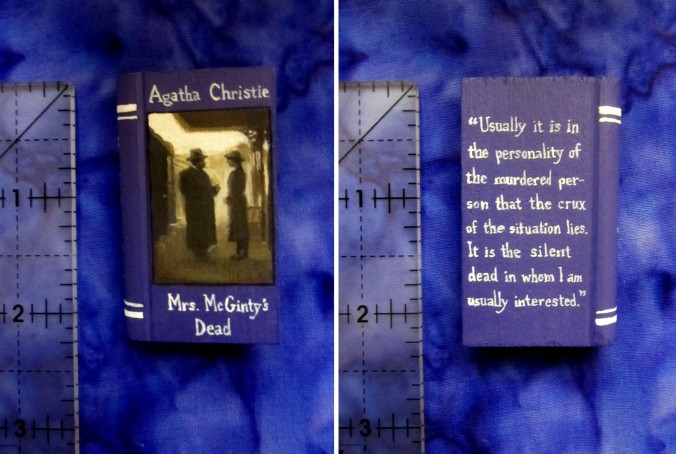 Another “different” shot– I did want to vary up the covers so that it wasn’t just a series of Poirot head shots, but rather told a bit of the story– at the train station. The episode of Mrs. McGinty’s Dead is full of all sorts of interestingly atmospheric filters, which gives the whole thing a sort of dreamy effect.

I rather wish this quote had made its way into the “Truth and Lies” section of the new book of Poirot quotes, Little Grey Cells. Words of wisdom.

Another cover that is probably a favorite, for two reasons: the character of Norma Restarick came out quite recognizable even at such a tiny scale, and it was a delightful treat to paint some of those gardens in the background. As soon as I saw this scene in the episode, I knew it would be the one to go on this cover.

It was tricky to get a good photo of this book (alas, I didn’t), but it’s also a different sort of cover because the image I used was a lovely, extremely back-lit one– the figures are actually darker than they appear in this picture, and the painting in the background (my favorite bit) is a little less sharp and more hazy. The Labours of Hercules was my one chance, really, to get the Countess Rossakoff onto a book cover.