Such is Poirot’s passion and enthusiasm for order, tidiness, and his own successful methods of operation, that he takes a frequent paternalistic interest in organizing the lives of other people for them. Whether it is rearranging crooked ties or engaging in matchmaking between timid parties, Poirot (himself of indeterminate but mature age) manages to treat many of the adults around him rather like wayward or slightly foolish children.

“Going to marry James Bentley? Deirdre Henderson? Who says so?”

“I say so,” said Poirot. “I occupy myself with the affair. I have, now that our little problem is over, too much time on my hands. I shall employ myself in forwarding this marriage. As yet, the two concerned have no idea of such a thing. But they are attracted. Left to themselves, nothing would happen– but they have to reckon with Hercule Poirot. You will see! The affair will march.”

“Don’t mind sticking your fingers in other people’s pies, do you?”

It is not surprising that a character like Hastings, who Christie writes as naive and boyishly eager, would be subjected to a great deal of paternalism, if not outright patronization, by his mentor. The fact that Poirot has (regrettably) had no family of his own, and Hastings has no near relations, probably heightens the dynamic.

The treatment in the television series is interesting, as the characters are cast very closely in age and thus perhaps present more of an air of domestic fraternity than one sees in the books. The character of Hastings is never infantilized in either book or television, but in the series the scriptwriters have allowed themselves several charming moments of parental condescension where– consistent with the books– Poirot clearly views himself as the wiser and more authoritative pater familias, and Hastings as hopelessly jejune.

Hastings: “Have you got a lot of plasticine? I could do with a bit.”
Poirot: “Hastings… you are of too great an age to play with plasticine.”
-Murder in Mesopotamia

Poirot: “Hastings.”
Hastings: “Yes, old chap?”
Poirot: “I have worked hard, Hastings, to prepare for you the delicious dinner. I have searched the shops for the exotic herbs. I have argued with the butcher, who is a fool. I have beaten the escalopes with a little mallet until my arm, it aches! And you sit there shoveling food in your mouth and writing in your little book!”
Hastings: “Oh, I’m sorry…”
…
Poirot: “Now close your little book and eat your dinner!”
-The Adventure of the Western Star

Hastings: “Running like a bird since I fitted those new gaskets.”
Poirot: “Birds do not run, Hastings. When you were little you should have paid more attention to your lessons in biology.”
-The Third Floor Flat

Hastings (moving things into Poirot’s flat): “This is awfully decent of you, Poirot.”
Poirot: “Oh, not at all, mon ami. I need you where I can keep an eye on you. To protect you from the beauties with the auburn hair, no?”
-The A.B.C. Murders

Poirot: “Hastings. Sometimes you are like a little child. So innocent, so trusting.”
-Curtain

What is so interesting about Hastings’ reminiscences after Poirot’s death, as he sits in the drawing room of Styles Court with his daughter Judith, is that his thoughts seem to be largely occupied with moments of this sort. The paternal touch might have felt slight or unimportant to many viewers over the years, but it seems to have had a great impact on the character of Hastings. Of all the many things he could have said about his life and friendship with Poirot, this is how he sums it up…

Hastings: “He was my dearest friend, you know. He was always there– keeping an eye on me, ticking me off– like a father, really. I’m not quite sure how I’ll cope without him.”
-Curtain

You know the scene where Elizabeth Cole is playing Chopin’s Raindrop Prelude right after Hastings has had his final chat with Poirot? Hastings walks in on her; she stops playing when she sees him; Hastings has a few moments of pause, then dashes back upstairs to find his friend dead in bed.

What exactly is it that triggers the dash upstairs? Instinct? The simple fact that the music has stopped dead is what immediately leaps to the eye (or ear), and that is an important part of it. But there’s another component that is more pointed. 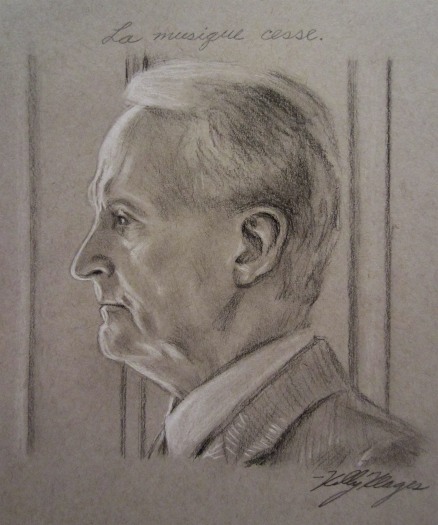 The fact is that this scene exactly parallels the scene where Hastings first meets Poirot again there at Styles, all those years later, at the beginning of the episode. Elizabeth Cole is sitting at the piano, playing the very same piece. Hastings opens the drawing room door, and there is his friend. Poirot turns to face him, and as he opens his mouth in greeting…

The reason, I humbly and speculatively propose, that Hastings stands there awkwardly at the drawing room door when he opens it on the day of Poirot’s death, is that he feels déjà vu, as though he’s waiting for something to happen. And something does happen. Once again, the music stops. Once again, he hears his name: “Captain Hastings?” But it is not Poirot who greets him. That’s when it occurs to him that there is only one difference in the two scenes: Poirot is gone.

Poirot is gone. And when he realizes this, it is then that he rushes upstairs again to see if it is true… and it is.

Hastings returns to the drawing room to ruminate in grief with his daughter, Judith, afterwards.

This new ambigram is in honor of the snowy power outages we had this evening. I lit several tea lights in my craft room and planned to finish my doodles by candlelight, but the lights came on again before I could finish. Oh well… this meant I was able to use the scanner.  😉

The ambigram reads upside down or rightside up, either orientation. Yes, that was a bad pun. My original ambitious plan was to pair this with a pictorial ambigram which would turn an aerial-view train on tracks into a dagger and 12 slash marks, but I decided to give it a pass. Which is probably just as well…!

Anyone who knows me well knows that I like to art-and-craft in a wide variety of media and styles. So making a Poirot-inspired lap quilt seemed like an inevitability. When this thing’s done and quilted up, one can read or watch Poirot in quilt-y comfort while sipping a hot chocolate. Is not that a beautiful and consoling thought?

It is true that the floral batik is not the most Poirot-esque of fabrics, but I had all the other fabrics I wanted to use in hand already, and thought that one would help pull together the dark multi-color batik of the sashing and the ivory-and-brown tones of the pocket watch fabric. As it stood, I felt the black and white would clash too much with the off-white and browns. I suppose I could have found a fabric that used brown, black, and white and pulled it together that way, but I didn’t want to leave the quilt in that color scheme. I like colorful quilts. It’s busy, but the black-and-white pieces pop and the rest is colorfully muted. Works well enough for me.  🙂

Naturally, the quilt is very square-oriented and symmetrical. Particularly fun was using the black-and-white custom-printed pieces which I designed via Spoonflower, with many of Poirot’s most typical French phrases. I’m still contemplating whether to add a little moustache in the dead center.

One can’t have 39 miniature books just sitting loose, so the idea came about to make a miniature shelf for them. The enterprise began with a simple foam board model. From there I made measurements to ensure sufficient room for the books, including a space for a little “book holder” piece by which a single cover could be displayed outwardly, room for individual spacers so the books wouldn’t need to touch, and tiered shelves so each book could be more easily removed. A monogram piece was also sketched out– based on the design on Poirot’s slippers! I sent all my drawings and measurements to my friends John and Eva, who have a laser cutter, and they made me a mock-up. 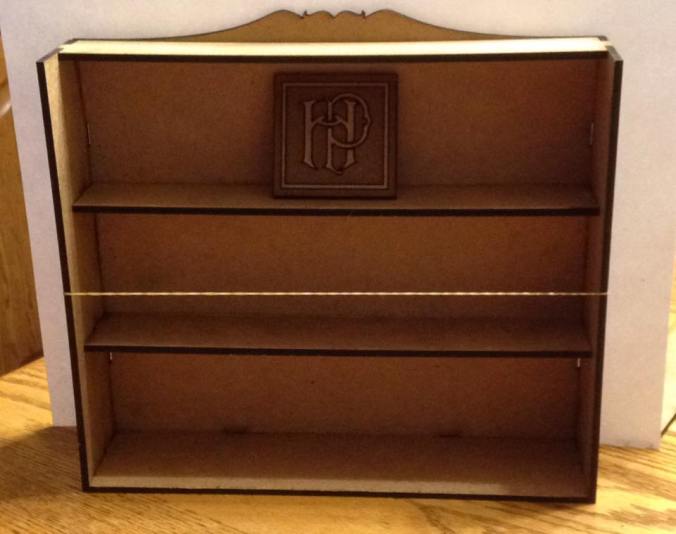 The next several weeks were a flurry of tweaking measurements again and again, re-cutting, trying (and failing) a few times to obtain the proper sort of walnut board for the finished product, but finally getting the pieces together. I love the little moustache that was added to the back of the book holder.  😎 Once the pieces were glued together, many small matchstick-sized bits of wood were carefully covered with red textured Velvet Paper, as were the shelves. The measurements for adhering the “matchstick” pieces had to be extremely precise. Here are some pics of the process…

And the finished product… 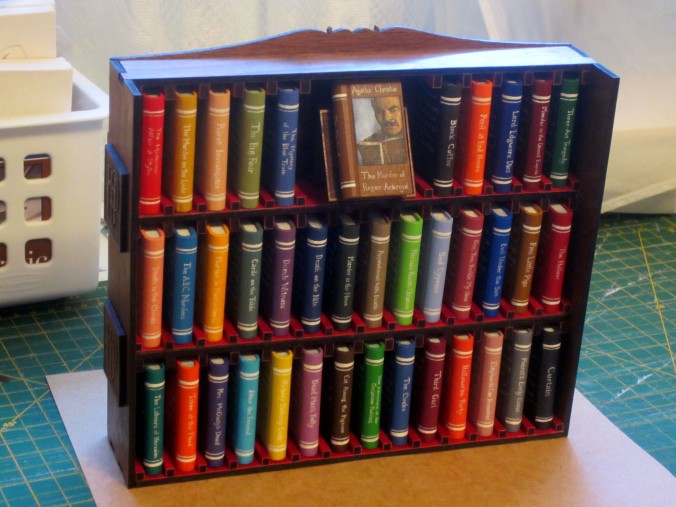 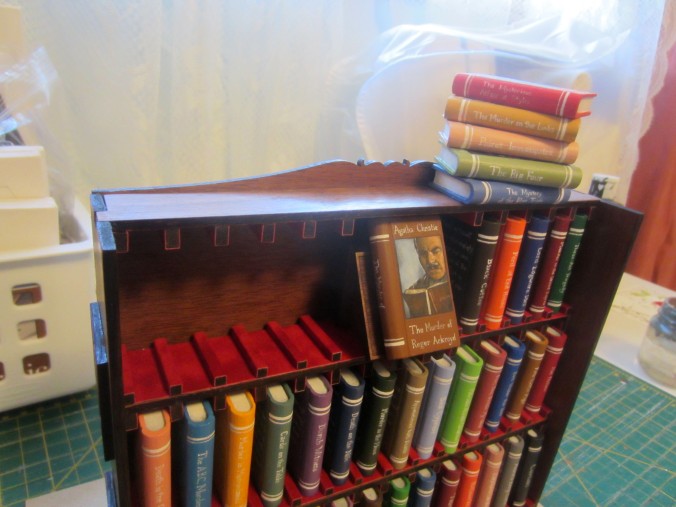 Thus essentially ends the story of my miniature books, a project encompassing a total of about four and a half months. This set of miniatures isn’t in my keeping anymore. I decided to mail the whole lot off to London this past summer to a deserving recipient.

‘Mille tonnerres! what is that?’

He dragged me back — just in time. A tree had crashed down on to the sidewalk, just missing us. Poirot stared at it, pale and upset.

‘It was a near thing that! But clumsy, all the same — for I had no suspicion — at least hardly any suspicion. Yes, but for my quick eyes, the eyes of a cat, Hercule Poirot might now be crushed out of existence — a terrible calamity for the world. And you, too, mon ami — though that would not be such a national catastrophe.’

‘Thank you,’ I said coldly.

I found out just a couple weeks ago, and completely by accident, that a colleague of my husband’s was that cornet player in the garden fête scene of Dead Man’s Folly, the last Poirot episode ever filmed. My reaction: “What the actual freaking what??!!”

But indeed, David Jackson went to the same little seminary in St. Catharines, Ontario as my husband (an LCC pastor), subsequently serving in a sister church body of ours in England. Here he briefly recounts to me his experiences (as an ELCE pastor way back in 2013) waxing musical in the final days of Poirot filming. 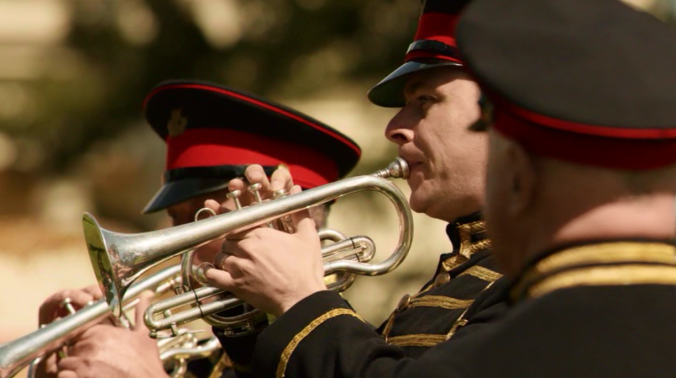 David’s the gentleman in clear profile in this shot.

“My performance as an extra in Dead Man’s Folly took place before I joined the military. At the time I was a pastor of St Paul’s Lutheran Church, Borehamwood, England and I also played cornet with the Borehamwood Brass. The Borehamwood Brass were invited to perform in the film, so that is how I ended up in a Poirot film. It was good fun! I even got to meet David Suchet and had a lovely conversation with him regarding his St. Paul documentary. He remained in character accent during our chat. I could not stop looking at his waxed mustache. He is a charming and very intelligent man.” 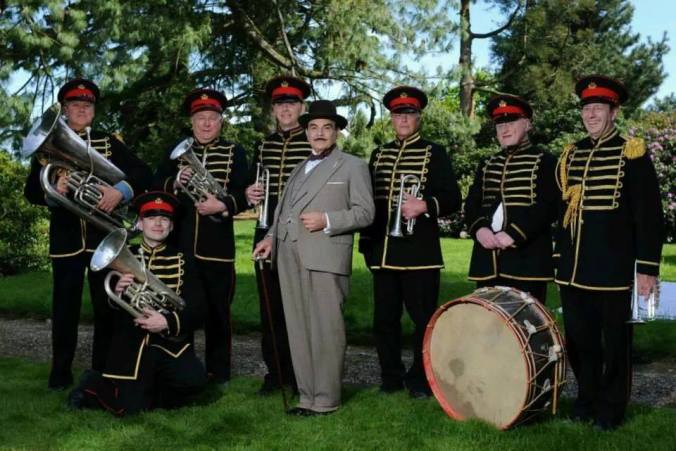