Since I’ve been creating certain set pieces in miniature, it has led to an investigation of various artworks that appear in Poirot’s flat(s). For fans of the show, one of the best-known paintings has to be the muted architectural scene that appears behind the fruit bowl in Flat #1. I’ve previously blogged about how Poirot seems to have been abnormally attached to this piece: it was first situated in his Belgian apartment building; then he seems to have nabbed it and take it to his first English residence in Styles St. Mary; and even after he “retires” to grow vegetable marrows, he conveys it to The Larches! I became curious about that image, and reverse-image-searching for it online had yielded no results. After creating a miniature of it, however, I decided to try again. The painting seemed a bit of an anomaly with Poirot’s other flat furnishings, I thought. In light of how the painting travels with him from Belgium, it would make sense if the picture itself was by a Belgian artist, just to connect it with the character. Indeed, I wondered if it might be a copy or print of a François Jean Louis Boulanger, a 19th-century Belgian artist (he’s called French in that link– don’t believe it!) whose style of “romantic realism” is strongly allied to the image. He painted a number of Ghent and Brussels cityscapes, so surely that would be a logical reason for the presence of that picture in the sitting room. But searching yielded nothing.

But a closer scrutiny revealed the building in Poirot’s picture as actually being the Bridge Tower of the famous Charles Bridge of Prague, Czech Republic! So much for the Belgian angle. After that revelation, further searching finally revealed the origin of the image. No paintings came up, incidentally, but a lithograph by one Vinzenz Morstadt (Czech) did:

Considering the composition, I think there can be no doubt that the painting in the sitting room was modeled after this particular lithograph. Whether the lithograph was also a painting by Morstadt that was copied, or was painted by another of his contemporaries (of whom Boulanger was one), or was just created by Joe Set Designer for the room because it looked Fittingly Continental, I cannot say. But at least most of that mystery is now elucidated, though why Poirot would be keen on a painting of Prague landmarks I also can’t say. (Incidentally, Suchet traveled to Prague for the very first time a couple of years ago. I wonder if fans in Prague have long been delighted at the sight of one of their best-known landmarks behind Poirot’s fruit bowl…?)  🙂 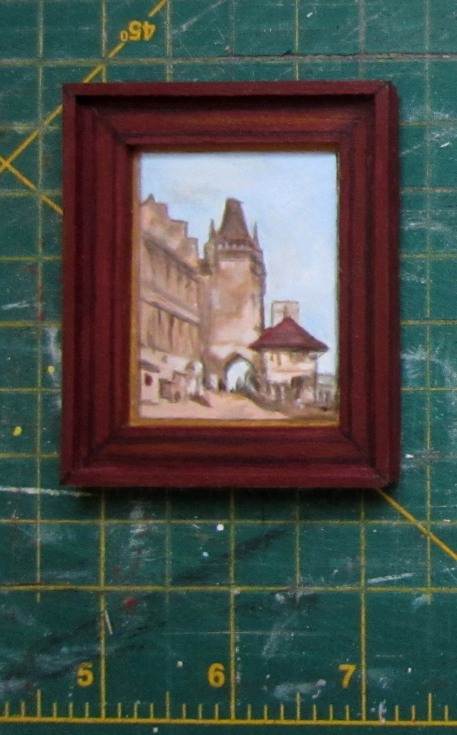