1.) Everything Hastings! “Problem at Sea” was a Hastings-less short story of Christie’s, but as usual, he was written into this earlier episode. In some ways, his involvement with this plot is more incidental than terrifically important, but whenever he shows up, he’s adorable and endearing. Some notable moments: his arrangement of the clay pigeon shooting tournament; Poirot’s unsuccessful attempt to engage him in conversation with Miss Henderson (“Oh, Hastings, Hastings, Hastings”); his participation in the “usual sort of tourist things” he’d planned to avoid in Egypt (and Poirot’s serious analysis of the photo poses); his successful nabbing of a jewel thief. If you didn’t love Hastings already, you definitely loved him by this first-season episode. 2.) Some of the additions used to bolster the plot. “Problem at Sea” is one of Christie’s more “slight” stories, one that requires some padding to make it work onscreen. Using the arranged entertainment on the ship was a clever way to introduce Ismene and her dolls, tying it into the ventriloquism thing. To make General Forbes have a romantic interest in Mrs. Clapperton was also natural, I think, considering that in the book, he rails against Col. Clapperton as a fraud. It might feel a bit of a stretch to think of anyone sustaining an interest in Mrs. Clapperton, but that’s just because the role was played with such perfectly-appropriate odiousness.

4.) The wardrobe. I mentioned the wardrobe already in my review of Triangle at Rhodes— it’s great throughout the series– but what stands out to me in Problem at Sea is Poirot’s wardrobe. Some of my favorite outfits of his are unique to this episode. Hastings, also, sports some great clothes, including casual wear that is not often seen in the series. 5.) Suchet’s dramatic delivery of the denouement. Absolutely spine-tingling, just as it was intended to be in the book.

1.) Despite the wonderful delivery mentioned above, the script’s climax was written to be much less dramatic than the book. And this is my primary criticism. What makes the story interesting is not really Clapperton being a ventriloquist; in fact, that’s certainly one of Christie’s most unoriginal solutions, in my opinion. What makes the story fascinating is that Poirot knows that Clapperton has a weak heart and deliberately shocks the crud out of everyone with his dramatic denouement– purposefully sending Clapperton to his death from shock. When confronted by Ellie Henderson for his “cruel trick,” the story ends with this ominous, ironic, and chilling statement:

“I do not approve of murder,” said Hercule Poirot.

In other words, Poirot basically murdered the guy because he didn’t approve of murder. This was, perhaps, considered too much for the TV audience to handle, or something. But it’s what makes the whole story intriguing.

2.) I wanted Mrs. Clapperton’s voice to be more distinctively annoying than it was. Its very shrillness is part of what made it possible for her husband to imitate it so convincingly. In the episode, it was a little hard to believe he had so accurately imitated the woman’s voice that came through the other side of the door…

3.) Col. Clapperton’s stiffness at supposedly being “found out” during the card trick rang a bit hollow to me, and sounded more like he was angry or offended rather than embarrassed.

4.) I didn’t understand the point of some of the characters. The Tollivers, for example, seemed to have no real reason for existing. (And their first names are Oliver and Molly– Ollie and Molly Tolliver! Ack.) Also, although no one (except Forbes, apparently) likes Mrs. Clapperton, it is perhaps a bit difficult for the viewer to formulate ideas on why she would have been murdered. There’s the money and jewel-robbery angle, but that is pretty quickly diffused by Poirot. It’s impossible to suspect the two girls. Forbes, old Mr. Russell, a random bead-seller, or the Morgan sisters? Meh. The only people one suspects at all are the husband or Ellie Henderson.

Things that really confused me:

1.) Pamela and Kitty are chasing after Col. Clapperton, described by Christie as a “tall, soldierly-looking man.” Now, no disrespect intended to John Normington. But HASTINGS IS ON BOARD. Seriously– who ought Pam and Kitty be clamoring after? Seriously? I’ll tell you:

And there’s no excuse. Pam and Kitty can’t even be mere gold-diggers, because Clapperton’s wife is the one who has all the money.

2.) The amber beads. First, when they were found near the body, Poirot doesn’t scold Hastings for picking them up and possibly ruining fingerprint evidence. Second, Poirot asserts at the end that the beads were definitely not Ellie Henderson’s, despite the fact that they look identical to the ones she bought. How does he know they weren’t hers, and that someone didn’t just take them because they were convenient to plant suspicion on either her or a bead-seller? She had mentioned earlier that she lost her beads; why insist those weren’t hers? That seems rather an odd coincidence.

3.) I really wanted to know more of the back story hinted at when Hastings and Bates are standing on the deck. Hastings bemoans the woman inside singing “The Army of Today’s All Right” and “The Kashmiri Love Song,” after he’d explicitly asked for no soldier songs or Indian love lyrics. “We’re all civilians now, Bates.” In the midst of all the comic moments Hastings supplies, this is a rare glimpse of something dark in Hastings’ past, probably related to his military service. The Mysterious Affair at Styles and Curtain are almost the only stories that hint of this past, but incorrigible fans want to know more! Conclusion: An episode with plenty of fun. Not the most brilliant of scripts, but very well-delivered, including one of Poirot’s best denouement speeches of the earlier episodes. Some great character development for Hastings, too.

This is an 8×10″ sketch from The Affair at the Victory Ball. I like it alright, though it’s hardly my best Poirot painting. But oddly enough, it’s the most liked thing I’ve ever tweeted, owing entirely to being retweeted by both David Suchet and Hugh Fraser. That’s a first!! 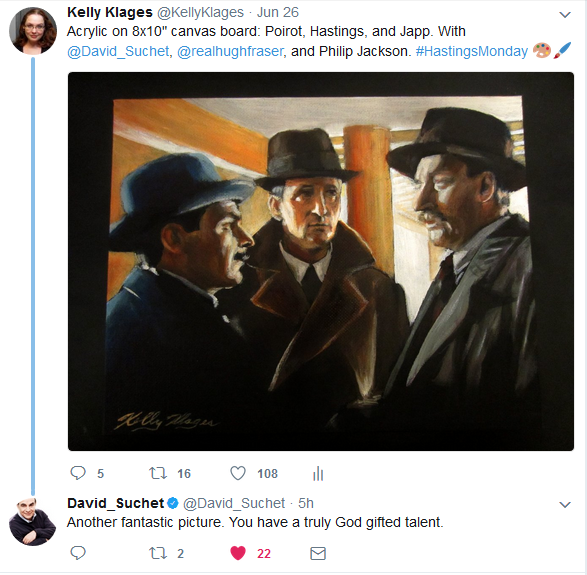