I know, it’s been ages since I blogged. So much theatre stuff has been happening lately! But I’m here now with an edition of “Poirot Gourmet” that I’ve been meaning to post for awhile (I’ve got a couple posts in reserve). Just in time for Valentine’s Day!

I recently found a box of Belgian waffles (Mountain Waffle Co.) that specify Liège as their origin. Not to be passed up! 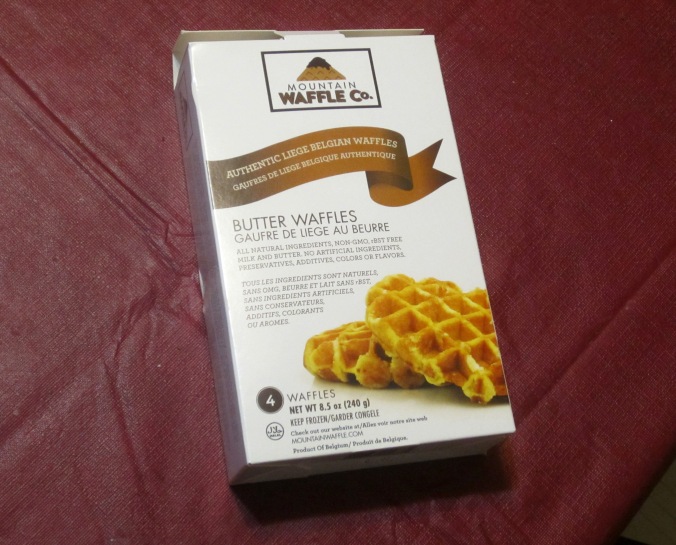 Toast them up, add some imported Sirop de Liège (one of the region’s specialities) and a glass of orange juice, and you’re in gourmet breakfast heaven! There is so much sugar in this picture, it is not difficult to understand why Poirot had a sweet tooth.  😉 Liège waffles have pearl sugar and are HEAVY– you can eat just one and be full!

Did you know that Brussels waffles are significantly different from the Liège kind? Here’s an interesting blog post about it.

This has to be one of the most Poirot things I’ve ever featured for Poirot Gourmet.  🙂  Readers with a good familiarity with the books will likely remember the detective’s appreciation for square crumpets. Combine them with this distinctive and characteristic fruit spread of Liège, and voilà! We have an English-Belgian fusion worthy of Poirot.

I used square silicone egg rings for my crumpets. Alas, I am not what the English would call a “dab hand” at crumpets. They turned out more like pikelets– either I killed the yeast with too-warm milk, or my baking soda was taking the day off. Also, like many egg rings used for crumpets, they lend themselves to a shallower product. At any rate, they’re still quite edible.  🙂  I also decided that they weren’t initially quite square enough. Here’s how they looked at first…

…So I gave them a good severe trim with my lasagna server.  🙂  Before I move on to the spread, here are some book references for you…

Order and method had been Hercule Poirot’s watchwords from many years ago. With George, his perfect manservant, and Miss Lemon, his perfect secretary, order and method ruled supreme in his life. Now that crumpets were baked square as well as round, he had nothing about which to complain.

…And in due course, the faithful George was instructed to provide a meal of square crumpets richly buttered, symmetrical sandwiches, and other suitable components of a lavish English afternoon tea.

…The resourceful George had on this occasion produced large cups, a pot of really strong Indian tea and, in addition to the hot and buttery square crumpets, bread and jam and a large square of rich plum cake.

All this for the delectation of Inspector Sharpe, who was leaning back contentedly sipping his third cup of tea.

…His eyes strayed from the jigsaw puzzle in front of him to the chair on the other side of the fireplace. There, not half an hour ago, Inspector Bland had sat consuming tea and crumpets (square crumpets) and talking sadly.

The spread I used is a Belgian import with a consistency rather like apple butter and dark and heavy like molasses. Sirop de Liège is made primarily with pears and apples, but also (to a lesser extent) dates, apricots, and prunes. Pear/apple syrups and spreads of this kind had been developed in the area for centuries, but this particular recipe was apparently nailed down around 1937 and trademarked after the war. You can read more about it here. It is VERY sweet and concentrated– there’s no need to add more sugar! Liège, of course, is the general vicinity in Belgium from which (we are given to understand) Poirot hails. We know that he likes anything sweet and sirop-y, so this spread is really a no-brainer for Poirot Gourmet. And it’s absolutely lovely with these little griddle cakes. 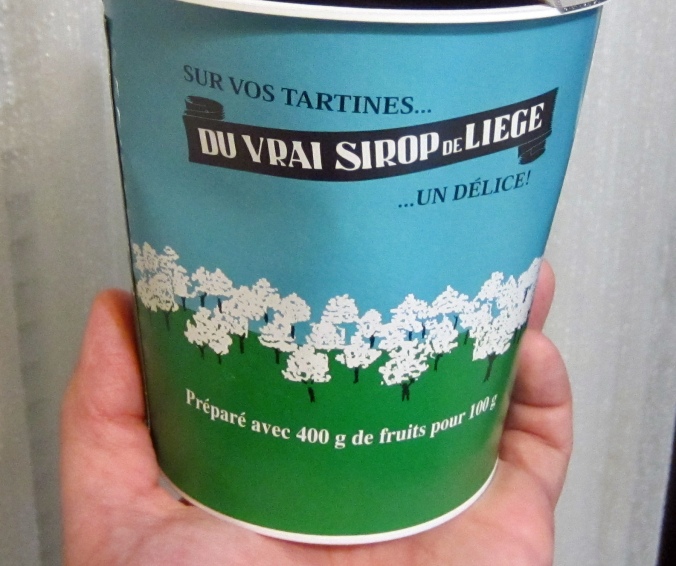 We found this local (Winnipeg-based) Belgian-style beer the other day. It’s called Le Sneak Belgique, a witbier made with coriander, orange peel, and black pepper. Did I mention that the can is adorned with a moustache??  🙂 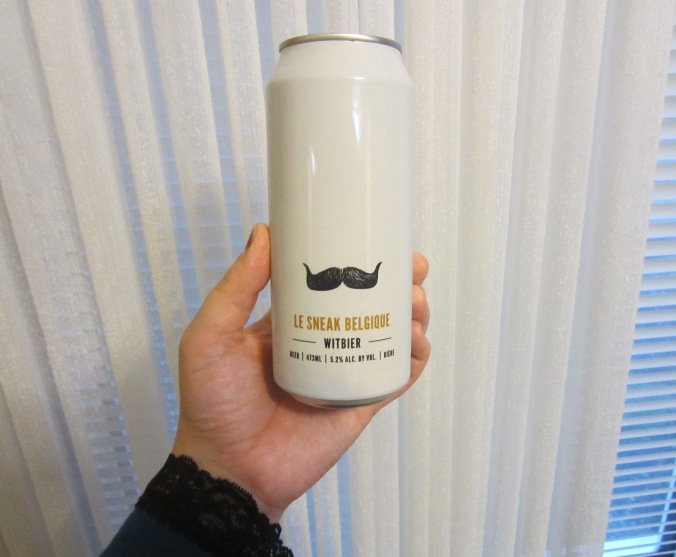 I had to bring it home and feature it in a blog episode of Poirot Gourmet. So I decided to pair it with miniature versions of Quiche Lorraine and a side salad with tomatoes, walnuts, balsamic vinegar and black truffle olive oil.  🙂  Lovely comfort food for autumn!

I’ve been eager to try out various cocktail recipes with my newly-acquired Elixir de Spa. (For more information about this liqueur from Spa, Belgium, see this previous post.)  This one is called Elixir de Spa du Chef. It’s a nice, summery, champagne-based drink with lime juice, Angostura bitters, and of course Elixir de Spa.  🙂  The recipe can be found here.

My personal word to the wise: don’t leave out the bitters! The champagne and liqueur together is going to be very sweet, and although I tend not to blink at drinking sugar, it’s not everyone’s thing! I don’t often use bitters, but I was happy enough to use them with this drink.

Let’s make the most of our last couple weeks of summer, all! Santé!

I was making fondant-covered sugar cookies anyway, so I thought, why not…  😉   Pictures are painted with gel food coloring and vodka.

Things are heating up (or cooling down?) here in the “Poirot Gourmet” corner of the blog, because Kelly has discovered the joys of importing Belgian. Things are about to get that much more authentic, dear readers! Have I got some fun in store for you…  😉

Agatha Christie implies in the book The Big Four that Poirot originates from the Belgian city of Spa, in the eastern province of Liège. The TV series seems to follow this line of thinking as well, particularly in the episode Four and Twenty Blackbirds, where Poirot introduces Hastings to his mother’s Liège-style cooking. I had been poking around a bit for interesting-looking Belgian recipes to share here, but I thought I might as well get more specific. What is gastronomically unique to the area of Liège, I wondered?

Poirot is fond of liqueurs, and lo and behold, I chanced upon one that actually hails from his hometown. By name: Elixir de Spa! 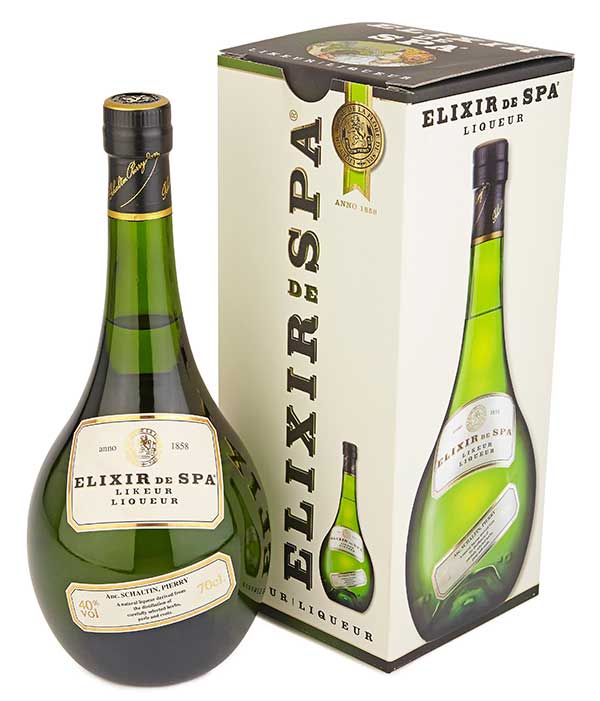 You can read all about this liqueur here, along with recipes for cooking and cocktails. It is made from a wide variety of aromatic plants and herbs, and is apparently renowned for its digestive effects. (That alone sounds like something Poirot would go for, doesn’t it?) Although it is a liqueur, I was somehow expecting something a little more bitter– perhaps the word “elixir’ conjured up purely medicinal associations, or my assumption may have come from the 40% alcohol volume. But no; it is quite sweet, and although I have no idea what’s in it, there is a definite anise or fennel flavor in there, like liquorice. But it isn’t overwhelming; rather, a pleasant and subtle melange of flavors, VERY smooth. It’s a long time since I’ve gotten a buzz from a liqueur, so there you go.

Anyway, I found a cocktail recipe on that page called “Elixir de Spa Poire,” and it seemed very appropriate to feature here. 🙂  The name Poirot can be read as a contraction of “poire” (pear) and the diminutive “-ot,” as in “little pear,” possibly suggesting his shape. Some read the name “Poirot” according to traditional name etymology, presuming someone who grows pears or lives by a pear orchard. At any rate, from what I’ve read, pears actually seem to feature prominently in the food prep of this region… so Elixir de Spa Poire it is!

The recipe is fairly straightforward– the liqueur, pear juice, fresh mint, and orange zest.  I omitted the ice for serving and also used sparkling pear juice (call it a tribute to the famous bubbling waters of Spa). 😉  The result is AMAZING. Next time I will use ice, and possibly drink it for the rest of the summer!

I look forward to seeing what other interesting things can be made with Elixir de Spa. 🙂 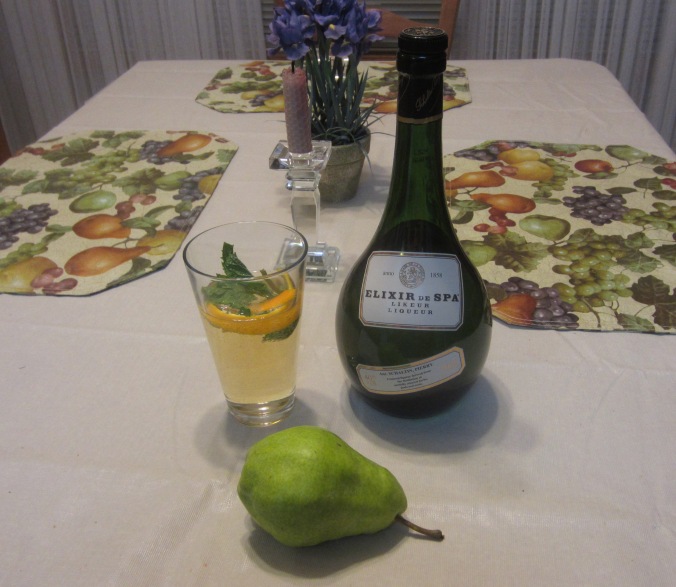