The cover for After the Funeral includes Robert Bathurst as Entwhistle. The quote is typical Poirot. 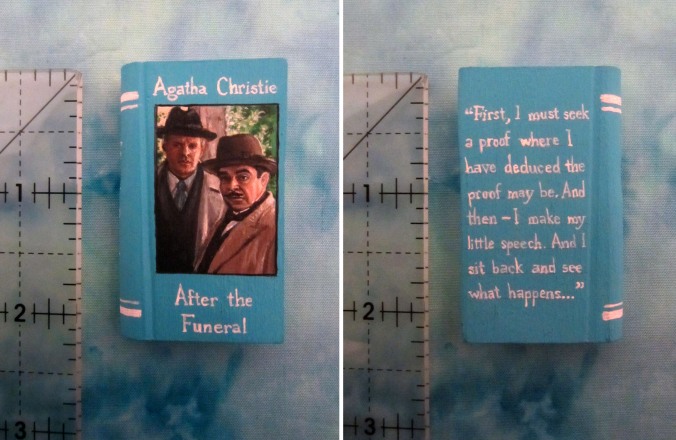 Cat Among the Pigeons is the Poirot novel in which the detective is most absent; it almost needn’t be a Poirot novel at all. (The fact that Poirot is insanely tiny in the shot sort of makes sense in that context.) The cover image features a scene where Poirot is addressing Meadowbank School, and it very nearly breaks my self-imposed rule of “if it couldn’t have happened in the novel, it can’t go on the cover.” I decided that Poirot could, conceivably, have addressed the school in some capacity, so I went for this shot after all. It was so hard to find a usable pic for this cover. I’d found a nice still of Poirot with the voodoo doll, but that’s totally not a plot point in the book, so that was right out. And the quote was hard to find, too, because of the lack of Poirot dialog in the book! Incidentally, the Poirot quote I did find actually sounds like a bit of an echo from a passage in the Sherlock Holmes novel A Study in Scarlet. All told, a very tricky cover.

Blue Train was full of beautiful shots and wonderful quotes to boot, so no problems there. I decided on this encounter between Poirot and Katherine Gray (played by Georgina Rylance). The still featured some lovely blue highlights that matched the color (and title) of the book, and Poirot’s outfit here is one of the very best I’ve painted. Loved painting those beautiful little lavender roses and the crystal glass as well. The quote is one of Poirot’s best and most memorable. Delightful miniature to work on all around.

The Clocks contains one of the rare first-person narrations by a character (albeit inconsistently) in a Poirot novel other than Hastings– in this case, Colin Lamb, played by Tom Burke. I admit I had no idea who this actor was, but when I first posted this miniature on Twitter, all these Tom Burke fans suddenly came out of the woodwork, which was all right. Lovely to encounter them.  🙂  The image here is sort of vaguely psychological, which I thought was interesting, and it reflects the quote. Whereupon those investigating are, as is usual when Poirot is concerned, interpreting things in quite different and contrary directions.

I must be nearing the end of this collection of mini-books as far as these blog posts are concerned. Getting tired of them yet?  🙂  I just thought it might be a good idea to put a thorough record of what went into making them down somewhere.