On this Fourth of July, what a treat to be able to watch a live presentation of the Agatha Christie radio drama, “The Case of the Careless Victim,” right here in southern Manitoba. Flatlands Theatre Co. has been doing a series of events at Bethel Heritage Park in Winkler this summer– and woe betide me if I miss Poirot when he’s within a ten-minute drive!!

The set-up was delightful, with the Flatlands cast in period costume for the benefit of the audience– Poirot was even given a cane. Since it is radio, I’ll forgive his extra facial hair, especially since the accent was so nicely done.  😉  The performances were all really excellent. Angela Klassen gave an especially memorable turn as the plucky Miss Abigail Fletcher, in whose apartment a body is discovered. “Watching” radio drama sound effects live is rather fun, and these were interspersed throughout the performance with generous doses of Christopher Gunning’s Poirot theme music. There was even an adorable vintage-tinged commercial break.  🙂 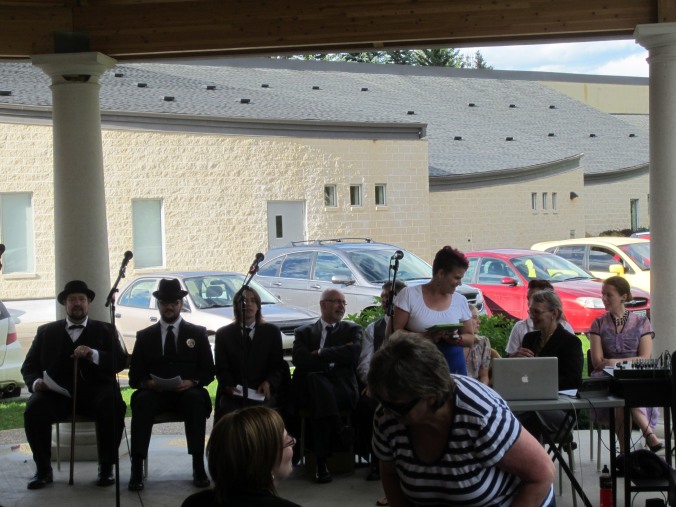 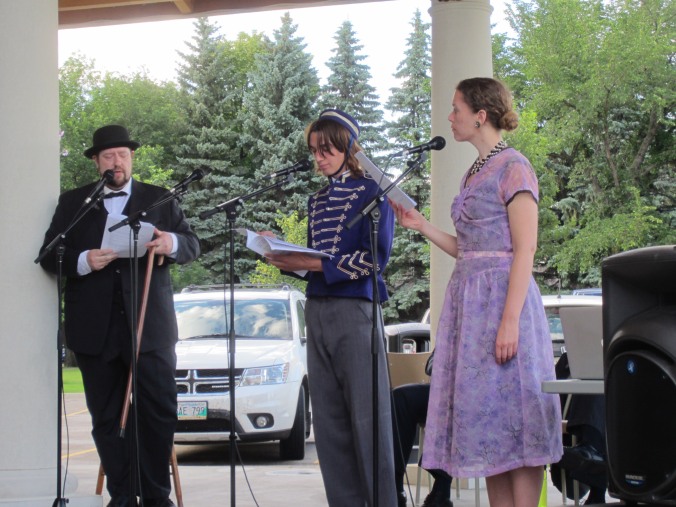 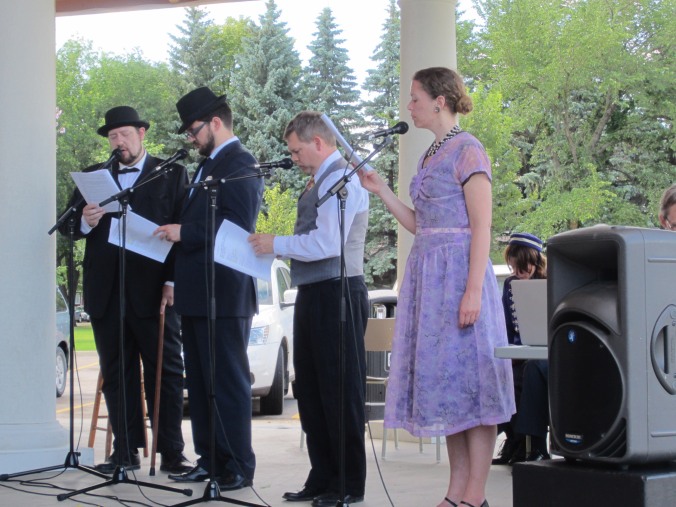 Now, the world of “Poirot audio” is familiar to me– I’m a frequent listener of Christie’s audiobooks a la Hugh Fraser and David Suchet, and John Moffat is known to me as well– but Christie’s own radio dramas via the American market was a huge, mysterious unknown. I wasn’t sure what to expect, or even if the story was really a Christie original, as I’d never heard of it before. The plot had some typically Poirot-esque elements, but with some glaring departures from Christie’s usual style for her Belgian sleuth. First and most obviously, Poirot himself is in America, which never happens in the books. He even takes an apartment and hires a secretary there! Second, in the radio drama script, there are a few phrases and thoughts expressed that one does not normally associate with Poirot. He says “sacrebleu” twice, a phrase I don’t ever recall Christie putting in Poirot’s mouth (despite a Poirot reference in the Wikipedia article on the term– incomprehensible). He also once mentions finding the circling of airplanes at the location where he is dining as “charming” in that it gives the sensation of flying, although Poirot himself detests air and sea travel, which makes him feel sick. (This also explains why he hadn’t gone tripping across the pond in Christie’s stories– the Channel alone is hard enough for him!)

My ever-helpful husband found some information for me to answer some of these burning questions and puzzlements. It comes down to the fact that the rights to use the character were contracted from Christie to produce these radio dramas in the mid 1940s, which explains the discrepancies from canon and why they are not included with other Christie Poirots. You can go to this link and read all about Hal Huber’s efforts in procuring Poirot for American radio– it’s interesting stuff.

Good job, Flatlands– and thanks for introducing me to Poirot in America!