…that you, too, can apparently purchase an inexpensive phone cover with *cough* my artwork on it.

(Don’t purchase it. This is all obviously being sold without permission. I don’t sell my own Poirot drawings, for that matter.)

Flatlands Theatre Company (in nearby Winkler, Manitoba) is staging Murder on the Orient Express this fall! Auditions are in June… I will keep you posted. I’d love to be in it. 🙂

Not because of silly arguments about Kenneth Branagh’s Death on the Nile. 🙂

Because individuals were posting my fan art without attribution, and so I asked people more than once to tweak their post and make some mention of where the artwork came from or who really created it, as a matter of basic internet etiquette and common courtesy. These posts were generating several hundred “likes” and personal compliments to the original poster for “their” art.

The first time I noticed this, someone had slapped a filter on a Poirot sketch of mine and posted it. Since compliments were given to the poster with no correction made, I made a comment on that post about the courtesy of proper attribution. One commenter expressed skepticism that I was really the artist, and actually blamed me for not having a signature on that particular drawing (as if that kind of thing is unassailable armor against people taking credit for work online). As far as I know, that posting was never fixed.

Another poster re-posted the same sketch (unfiltered) and I again commented to ask for proper attribution. They began by sharing a link to where they’d seen it– which had been another page where no attribution had been given, incidentally– and ended up just deleting their whole post. Which I suppose is one step better.

The third time, a different poster shared pictures of my room boxes. To his credit, after a number of comments, he mentioned that they weren’t his own work, but since the comment was buried, credit given to him continued to be posted on the thread. So I pointed this out to him and asked him if he’d tweak the original post. He did so and apologized to me, not having realized that credit would be given to him. I thanked him– this was ❤ ❤ ❤ and I was content.

I messaged the admin of the page, outlining the above situations, and asking (politely) if maybe some kind of message could be sent out reminding page posters that in general, it was good manners to give attribution to other people’s artwork if there is a good chance of mistaken credit happening. The reply I got was that the admin had checked, and credit had indeed been given for my art on the last post. I pointed out that this was only because I’d asked for that specific change. Then I was told that “if I were in the group itself, maybe things could be different,” and that I should “maybe try being nicer to people.” I told her I didn’t know what she meant and didn’t understand what I’d done wrong here. And as far as I know, I am now locked out of the group. I seem to be blocked from viewing the page altogether.

Here’s the deal, friends. It IS basic courtesy, if posting artwork, to at least mention who actually created it and/or where you sourced it from (if you don’t know the artist), especially if otherwise you’re going to create the impression that you yourself created/sourced it. It’s egregious and puerile to let compliments to you stand where you didn’t earn them.

I don’t mind if people share my artwork. I know how things commonly get passed around online willy-nilly. Honestly, I don’t even mind if they fail to include my name when they share it. But I do mind if they share it without my name and then sit back and accept credit for it without making corrections. That is probably going to seriously annoy me.

I also do understand that many people who engage in this kind of sharing just hadn’t realized that they were going to be given credit, or didn’t think about that side of things; they weren’t setting out to deceive. If that’s you, then do what my one friend above did– make an “update” edit on the original post to explain, or respect whatever the artist’s wishes are in connection with the sharing/deleting of their work, and carry on with future postings in the same spirit.

And do not… on any account… peg the original artist the bad guy just because they don’t want the credit of their work to be taken and misattributed. That is not cool, my friends, not cool at all.

This is my first picture of Poirot and Co. in almost two years. Scene is from The A.B.C. Murders. Acrylic on 12″x12″ canvas board. 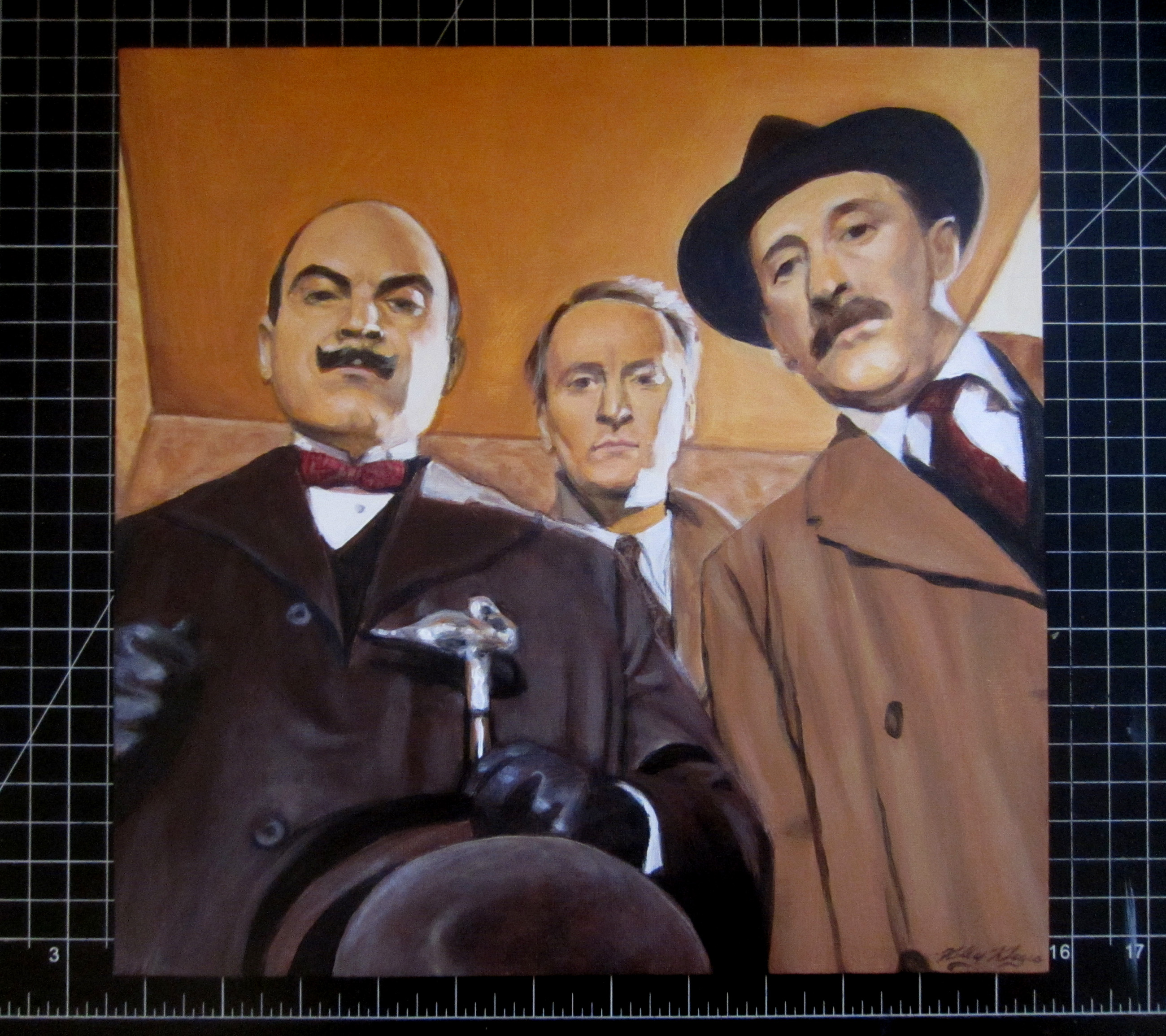 Today in Fabricland I came across this delightful find!

The design is a Fabricland original, but it reminded me of one of the batiks I came across a few years ago (and made pillowcases out of). See it, and others, in this post about some of the most “Poirot” fabrics you’ve ever seen.

You learn something new every day… did you know that Trumper’s shop from “HDYGG” is still a London establishment? From a David Suchet Facebook group:

“In that episode Poirot is seen at Geo Trumper’s. Trumper’s was and still is a famous establishment in London for scent, shaving items, mostly for men. I sent away to Trumper’s and got 2 bottles of Trumper’s cologne – I was so happy to see that it was literally in the same box, same type of bottle, that Poirot used in this episode. It smelled fantastic. https://www.trumpers.com/” -Wendy Charvat Bishop

Thanks for the info, Wendy!

Him: Now that you’ve got your sewing machine out again, can you pleeeease make me that second mask…?

Me: Fine, but it’s going to be Poirot-themed.

BritBox expands its collection of quality programming, partnering with Abacus Media Rights on a documentary commemorating the 100thAnniversary of Agatha Christie’s first novel. Premiering October 10 on BritBox in the U.S. and on Channel 5 in the UK, Agatha Christie: 100 Years of Poirot and Miss Marple explores the influences and impact of history’s most published author.

Already home of the largest collection of Agatha Christie stories in North America, BritBox will celebrate the centennial of Christie’s first novel, The Mysterious Affair at Styles, with an exclusive documentary, Agatha Christie: 100 Years of Poirot and Miss Marple .The film examines 10 of Christie’s most beloved novels, discusses her writing influences and delves into one of pop culture’s most famous protagonists, Christie’s fictional detective, Hercule Poirot. A Honey Bee production for Channel 5. Executive produced by Ed Taylor and Ros Edwards and directed by Sean Davison. International distribution by Abacus Media Rights.

Featuring interviews from New York Times best-selling author Anthony Horowitz, actors Hugh Fraser (Poirot) and Samantha Bond (Downton Abbey) and Christie’s great-grandson James Prichard, the detailed documentary analyzes Christie’s inspirations and the importance of the settings for each of the following novels: The Mysterious Affair at Styles, The Murder of Roger Ackroyd, Murder on the Orient Express, Murder at the Vicarage, Death on the Nile, And Then There Were None, Five Little Pigs, A Murder is Announced, The Pale Horse, and Curtain: Poirot’s Last Case.

The streamer has been expanding its Christie Collection since May with the addition of at least one new Christie title each month. In addition to this documentary in October, BritBox will add film adaptations: Agatha, Alphabet Murders, Murder at the Gallop, Murder Most Foul, and Murder, She Said as well as a radio documentary entitled Agatha Christie – Speaking Her Own Words, a collection of Christie reading from her own journals and discussing her life and works.

The winner of this latest art giveaway is “cheshirecatslave.” Congrats! 🙂

Message me your contact info and I’ll get your prize out to you next week. (kellyklages @ mymts.net)

Thanks for entering, all!