Since I’ve already covered the Hastings novels (no pun intended),  I thought I’d round off the rest of the covers with “series sidekicks” Inspector Japp and Miss Lemon. 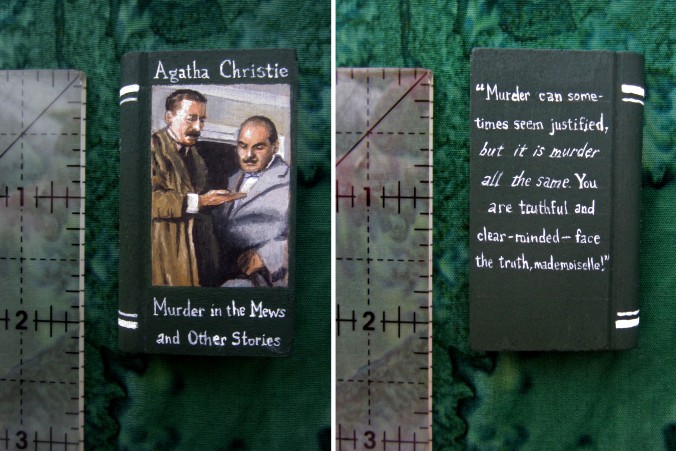 This cover for the story collection Murder in the Mews features Japp and Poirot contemplating a red “kipper” of a cuff link. Apparently I took this picture before painting the black line frame around the image! The quote on the back features an oft-reiterated sentiment from Poirot on the topic of murder.

This mini was the last one I ever painted, and I was happy to get Japp on just one more cover before the series was completed. He features in seven novels, after all, but was often squeezed off my covers by Hastings. This novel features Japp but not Hastings, and so was an ideal one to feature the good inspector. While I was painting this, my iPod actually fired up “Take On Me” by a-ha, and if you don’t know why that’s hilarious, well, it’s because Philip Jackson (in magnificent, rotoscoped glory) appears as Pipe Wrench Guy in the song’s video, which is considered by many to be one of the greatest music videos ever made. Go watch it now. Or maybe watch the literal video version for some extra giggles. Anyway, I was in hysterics while painting for that reason. 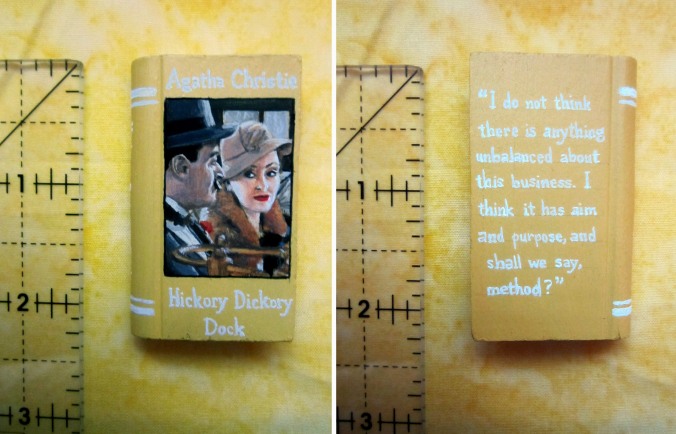 This photo is terrible, terrible, terrible, but Pauline Moran turned out nicely enough on this cover of Hickory Dickory Dock. Yellow is for Lemon. This novel was the most obvious one to feature Miss Lemon on the cover, as she (and her sister) feature prominently in the story. I rather wish I could take better photos of these book minis, but I don’t have them anymore. (And if I did, my photos would still be terrible!)